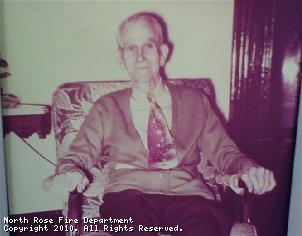 This is a photo of Robert Dickinson, who served as the very first Fire Chief of the North Rose Chemical Company No. 1 in 1915. Robert served a second term as Chief from 1917 - 1919 and then a third term in1921. A final alarm was sounded for Robert on June 12th 1957 at the age of 88. We thank Robert for his service and dedication that he put forth to build the foundation that we as a department stand on today.

In May, 1915, a meeting was held in the office of H. C. Miner who, with his father, were enthusiastic workers in forming a Volunteer Fire Department. There were eight men present and the following officers were elected:   Chief, R. D. Dickinson; Assistant Chief, Clare Peterson; Secretary and Treasurer, H. C. Miner. One week later another meeting was held and 32 men signed the roll. The organization was called the North Rose Chemical Company. It was then voted on to purchase uniforms, the men personally obligating themselves to this debt, thus showing their faith in the new organization. On July, 4th of that year a monstrous celebration was held, and due to the good work of the members and the splendid backing of the community, $500.00 above all expenses was realized. This amount placed the Department on a sound financial basis. On May 4th, 1917, a Hook and Ladder Company was organized with 27 men. The officers elected were:  President, H. E. Patrick; and Secretary, Seth C. Oaks. The new Company was heartily welcomed into the Department by Chief Dickinson and the members of the old company. Due to the war conditions, however, it was decided to consolidate the two Companies.

The Honor Roll of members who responded to their country's call, George Ball Jr., L. K. Boyd, S. C. Oaks, Hayes Catchpole, Edwin Catchpole, Lieut. Dr. F. F. Froney,  and Lieut. H. C. Miner. One member Orrin Thompson, made the supreme sacrifice, having died in the U. S. Naval Hospital in Brooklyn. His loss was keenly felt by the members, for he was always in evidence on all occasions and his happy disposition made a friend to everyone with whom he came in contact. 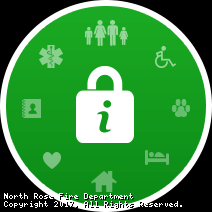 Whats going on around us

Visitor polls
Member login
Links
Mercey Flight Inc.
Our fleet of aircraft consist of helicopters and turbo prop air planes, outfitted with advanced medical equipment to ensure our patients have the best care possible during their journey.
EMS Lecture Series - CME Credits
Need CME credits? Check this site out.
Victor Fire Department
The Victor Fire Protection District covers the area shown in the map below. We are a Municipal District administered by the Village of Victor, NY and provide Fire Protection to a portion of the Town of Victor through a contract between the Town and Villag...
Newsletter
North Rose Fire Department

This site has been viewed 320,584 times.
Calls
Events
Pictures
Apparatus
Tweet
Maintained by the members and staff of North Rose Fire Department. Designated trademarks and brands are the property of their respective owners. Copyright © 2006-2022. YourFirstDue Inc. All Rights Reserved. Content on this web site is supplied by North Rose Fire Department. YourFirstDue Inc. cannot be held responsible or liable for any content, text, pictures, or any other media found on this web site.
Management login
Powered by